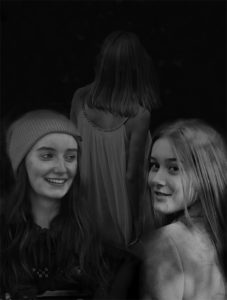 (Contains spoilers for the book Conflux: The Lost Girls)

FIRST EDITION, JUNE 20th 2020: This book, like so many, started with a dream. I woke up and soon wrote the basic concept and feel of it into a short story that constituted most of what are now chapters 1 and 2, ending with the two nameless main characters running off together, knowing only that wherever they were going, they were going there together. It was still very early into my journey as a writer and I continued with other works, including a prequel to this book that takes place nearly a century earlier, which is currently being rewritten to be officially added to the Conflux series soon.

But my mind kept drifting back to that short story, with the main questions that its ending hung on: What would happen to the two girls after escaping the vile slavery of the Ryan? Who were they? How did the protagonist muster her remarkable ability to help rescue her newfound friend?

It didn’t take long before I began expanding that short story into what would become the book you just read. They give each other names that have special meaning for one another: Care and Kade. They transformed into real people, who struggled with survival and the pain of remembering and sharing their pasts, dealt with the reality of the abominable environment they were trapped in, and encountered the complications of such a sudden and intense relationship between two complex and damaged young human beings.

Unfortunately, it took another ten years of picking up and losing the threads of the project before it would materialize into a published work. Though I’m happy to say that the speed and quality of my writing has since improved, and that future works will be coming out much more quickly, Conflux: The Lost Girls was a long and arduous process.

But that lengthy course of development is part of what makes it so special: it was a labor of love, and even when it would sometimes lie untouched for a year or more, I knew it would be completed. It had to be. Care and Kade couldn’t be left in the dark limbo of Piercing forever. Ten years also bore a mess of life lessons that helped me do more justice to the characters, by making them real and dynamic, full of the flaws and frustrations that beset us all, most of all young women in such a gruesome situation.

After days and nights writing and rewriting and editing beyond count, Care and Kade’s story is finally born into the world for whoever wants to hear it. And though its size is modest and its author of humble ability, I hope that the characters, their world, and their story connect with you, the reader.

In realizing early on that this and writing in general for me simply are labors of love, I decided to release all my writing totally free, rather than worry about agents and publishers and trying to squeeze money out of would-be fans. I don’t fault authors that want to get paid for or live off their writing, but I’ve found some of their attitudes toward publishing, fan fiction, etc to be distasteful. And coming from the generation of file-sharing, freeware, and pay-what-you-want, a generation that actively (and I think rightly) shuns digital rights management and other gatekeeping of infinitely reproducible products, and having been the beneficiary of so many helpful and genius products freely given, I think it’s only right to do the same with my humble works of fiction. I will make every effort to make it all as accessible as humanly possible.

I trust my readers to take care of me if they see fit, but even if I don’t make a dime, I’m glad to know you’re enjoying something I put my heart into and put out for the whole world to enjoy. I only ask that if you did enjoy this book, share it with someone you think will love it too! There’s more to come soon, for Kade and Care, and many other stories sure to take your breath away. In the meantime, read and write and share what you like! Stay safe out there.

1 thought on “Notes from the Author – Conflux: The Lost Girls”