Read the free preview of the Prologue and Chapters 1-3 here, and don’t miss the book when it’s released Summer 2020, along with a free audiobook version!

The partial prequel to Conflux: The Lost Girls – Conflux: From The Grey takes place nearly a century beforehand at the end of America’s gilded age. It is currently being rewritten to better standards.

A paranormal thriller, Conflux: From The Grey is the beginning of Leeroy Arthur’s story, a mentally-gifted sixteen year old with a past haunted by his parents’ loss.

Leeroy’s dreary life is both renewed and confounded when he happens upon a seemingly simple monocle with the power to see the lifeforces of those around him. It soon becomes clear that everything has changed since the mysterious artifact fell into his lap, as a web of secrets connected to it begins to unfold, endangering him and his family.

Playing hunter and prey in a battle of guts and wits with dangerous men and forces unknown, young Roy’s limits of wisdom and will are put to the test as he searches for answers scattered among enemies’ lying tongues and fragments of the clouded past.

Depending on keen thinking, intuition, and magical discoveries to survive on his own, he comes quickly and harshly to know more of the dark and deadly world of the supernatural.

Each bold step moves him through unthinkable situations and unimaginable realities, but when the shadows dissipate to finally reveal his place in the mystery, the truth beneath it all will be nothing like he thought. 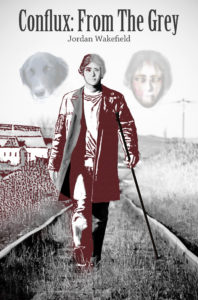 (Apparently this is what counted as a cover ten years ago.)