No Widgets found in the Sidebar Alt!

IT’S A BAD, BAD WORLD OUT THERE – Two teenage girls who don’t even know their own names. A nightmarish town that wants to eat them alive. When fate brings them together, will a murderous town full of sin and psychotic criminals pull them apart?

This book doesn’t pull punches. Packed with tension and betrayal, horror and triumph, Jordan Wakefield’s CONFLUX: THE LOST GIRLS follows two teenage runaways with pasts shrouded in darkness as they navigate a world ruled by drugs, violence, and dark conspiracies. With police, human traffickers and sexual deviants on their tail, they must make it out alive together. But when you don’t know yourself, can you trust the person next to you?

First in the Conflux series, THE LOST GIRLS will push you off the edge of your seat and have you begging for more. 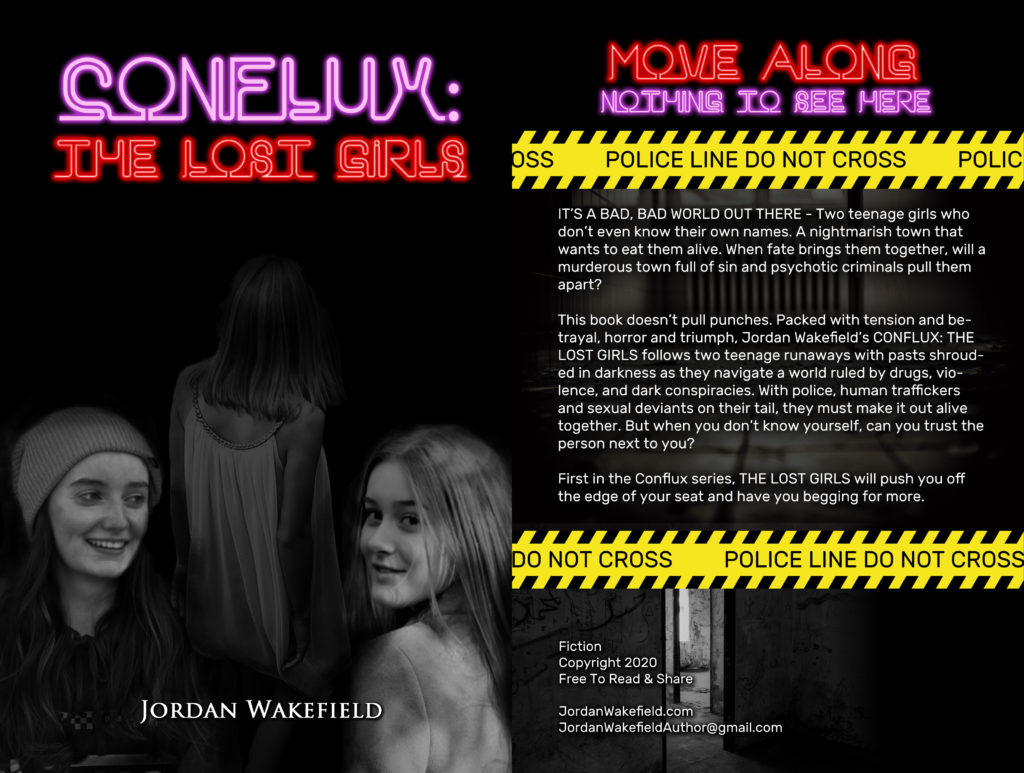 Conflux: From The Grey

The sequel to The Lost Girls – Conflux: From The Grey is currently being rewritten to better standards. A paranormal fantasy-thriller, From The Grey is the beginning of Roy Arthur’s story, a mentally-gifted sixteen year old with a past haunted by his parents’ loss, who discovers a magical monocle that flips his life upside-down as a mysterious conspiracy onfolds. (Read more…)

A disenchanted young man has a dream where he meets a beautiful girl who leaves him with a seemingly random phone number. It turns out the number is real and so is the girl from his dreams, but she doesn’t remember the dream or seem to know who he is. When intrigue turns into obsession, will a deeper truth reveal itself, or will the story turn to madness? (Read more…)

It’s 2022 and a mutated strand of Coronavirus has killed off most of the adult population. With a world now ruled by youngsters who value Juul pods, chicken tendies, and Gucci belts as much as water, ammo, and antibiotics, the future hangs in the balance as their harsh reality becomes more and more absurd.

How will they cope with a world in chaos? Will the U.S. government seize back control or will a more extreme political movement come to power? What does the next generation have in store? Inspired by Joseph Keller’s masterpiece Catch 22. (Read more…)

All downloads from this site are totally free. If you like the books, consider supporting the author with a small donation, or reviewing on Amazon or our Facebook page.